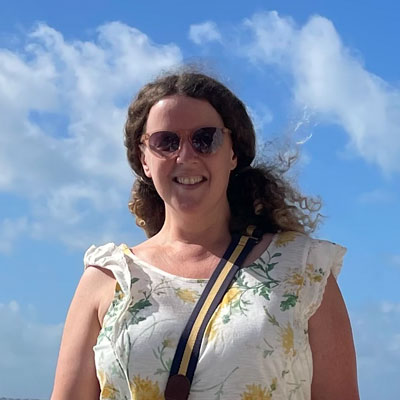 We all know the Caribbean islands offer powder-fine white sand beaches, perfectly clear turquoise ocean, and year-round warmth. But there’s so much more to them than that. Each island has its own personality, from the Dutch-influenced Aruba to the British territory of the Cayman Islands. Taking a Caribbean cruise gives you the chance to experience these cultural differences, sample island-specific gastronomic delights, and explore the unique histories found in this fascinating part of the world.

But, with so many islands and Caribbean cruise routes on offer, how do you know where to go and what to do? Here, we’ll take you through everything you need to know in this expert guide to Caribbean cruises.

Countries in the Eastern, Western, and Southern Caribbean 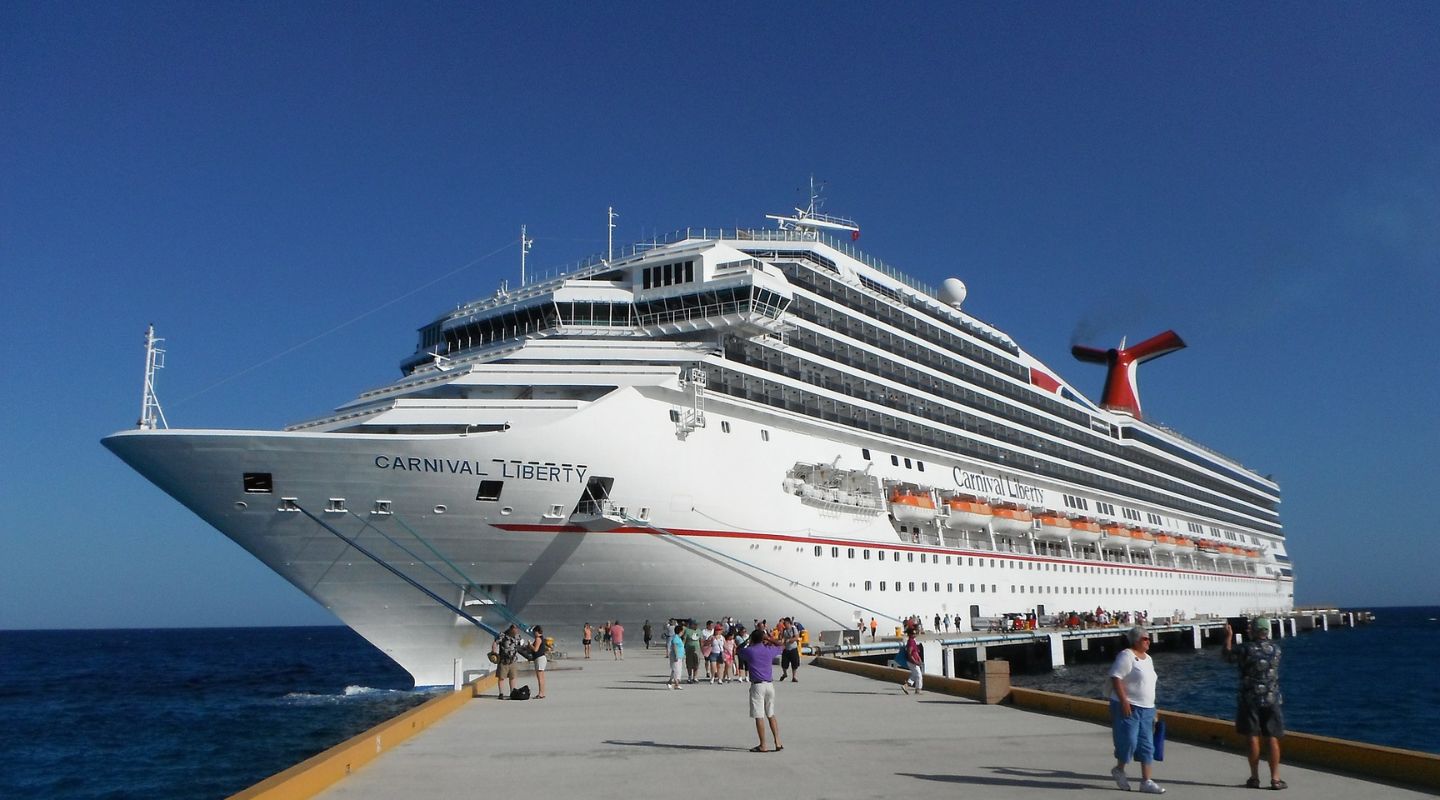 You’ll notice that most cruise itineraries talk about southern, eastern, and western Caribbean cruise routes, but which countries do these classifications include? Understanding this will help you decide which region you’d like to visit. 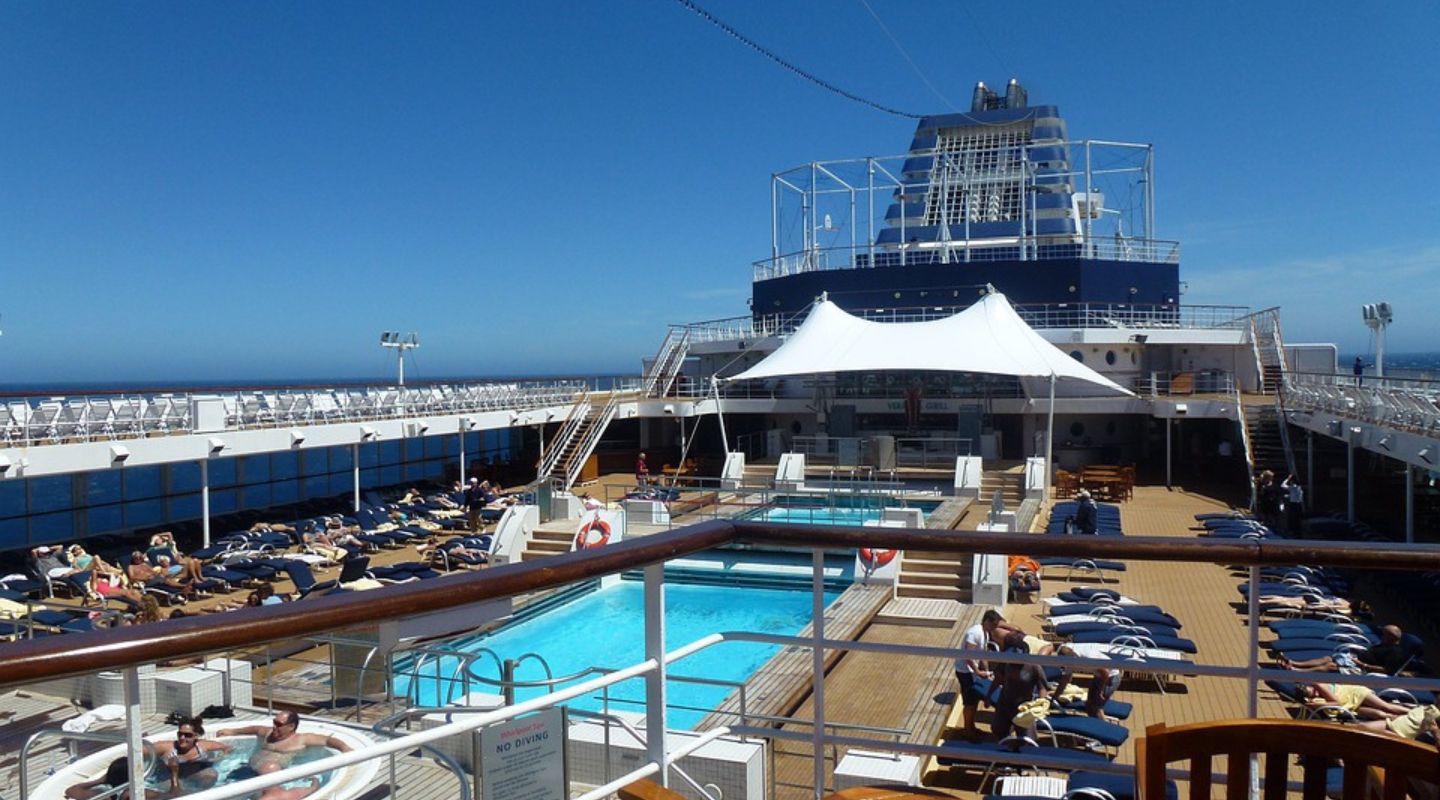 All-Inclusive cruises are great - you get to experience multiple destinations on one trip, your meals are taken care of, and all you have to do is wake up ready to explore. Here are 5 of our favorite all-inclusive Caribbean cruises.

On this Eastern Caribbean odyssey, you’ll board Royal Caribbean’s impressive Wonder of the Seas, the world’s largest cruise liner. Departing from Port Canaveral, you’ll get to visit five destinations during your 8-night trip.

This new 11-night cruise route operated by Celebrity Cruises is set to be a popular one, taking in some of the best southern Caribbean sights, as well as the Panama Canal. Departing from Fort Lauderdale on the new ship Celebrity Beyond, you’ll visit five ports during your trip.

Sailing from Port Canaveral with Disney Cruise Line, you can acquaint yourself with every aspect of the Disney Fantasy liner during an initial four days at sea. Once you’ve reached the southern islands, you’ll get to experience an impressive list of destinations, as well as Disney’s private island at Castaway Cay.

Operating out of Fort Lauderdale, this 14-day Holland America Line cruise takes in some of the best destinations in both the Western and Eastern Caribbean. You’ll never have more than one day at a time at sea, meaning you’re always close to your next destination. 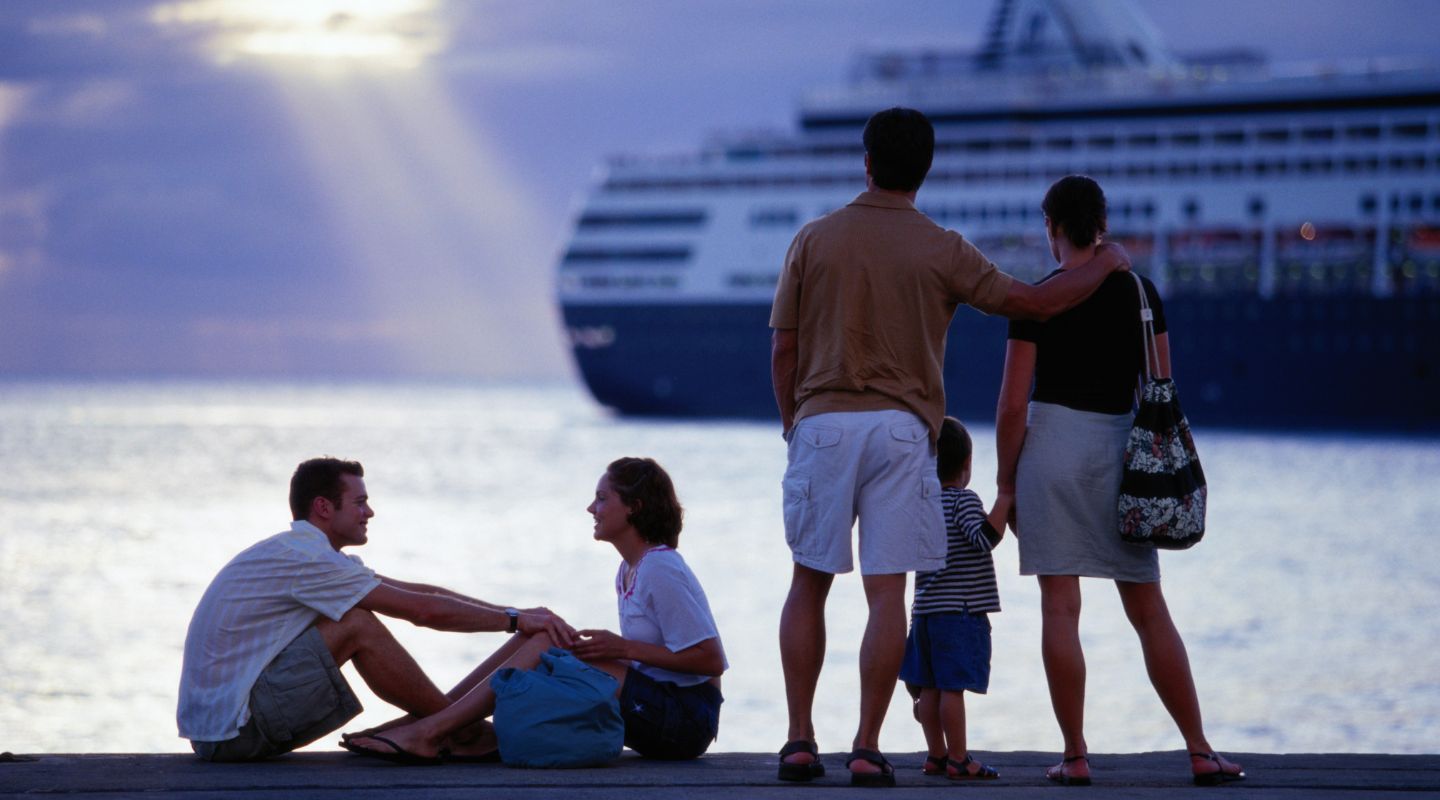 Cruises can be incredibly expensive, especially if you opt for one of the newer or more luxurious ships. But, if you’re looking for the best Caribbean cruise that won’t break the bank, there are some cruise lines that are known for being cheaper than others. Here are five of our favorite cheap Caribbean cruises.

Carnival offers some fantastic last-minute deals, for example, this cruise was priced at just over 260 USD per person for a 7-night cruise if booked a couple of weeks ahead of departure. Traveling from New Orleans on the Carnival Glory, this cruise focuses on the Bahamas, calling in at two different Bahamian island ports during your trip.

Departing out of Mobile, Alabama, this 10-day cruise takes in some classic Eastern Caribbean cruise destinations, and with a price tag of just over 600 USD, it offers great value for money.

Celebrity Cruises offer some huge discounts, either for booking far in advance or to fill ships just before departure. For example, this cruise was discounted by around 60%. Traveling on the well-rated Celebrity Equinox ship, the cruise calls at five ports during the 10-night trip.

If you’re looking for a shorter break, a 4-night Royal Caribbean cruise comes with a lead-in ticket price as low as 129 USD and calls at two of the favorite Bahamian destinations, traveling onboard the popular ship Freedom of the Seas.

Traveling out of Miami on the MSC Seascape liner, a 7-night MSC Cruises voyage will take you to some of the most popular cruise ports in the Caribbean. With deals as low as 349 USD, this is a real steal.

7 Tried and True Ways to Save on Caribbean Cruises 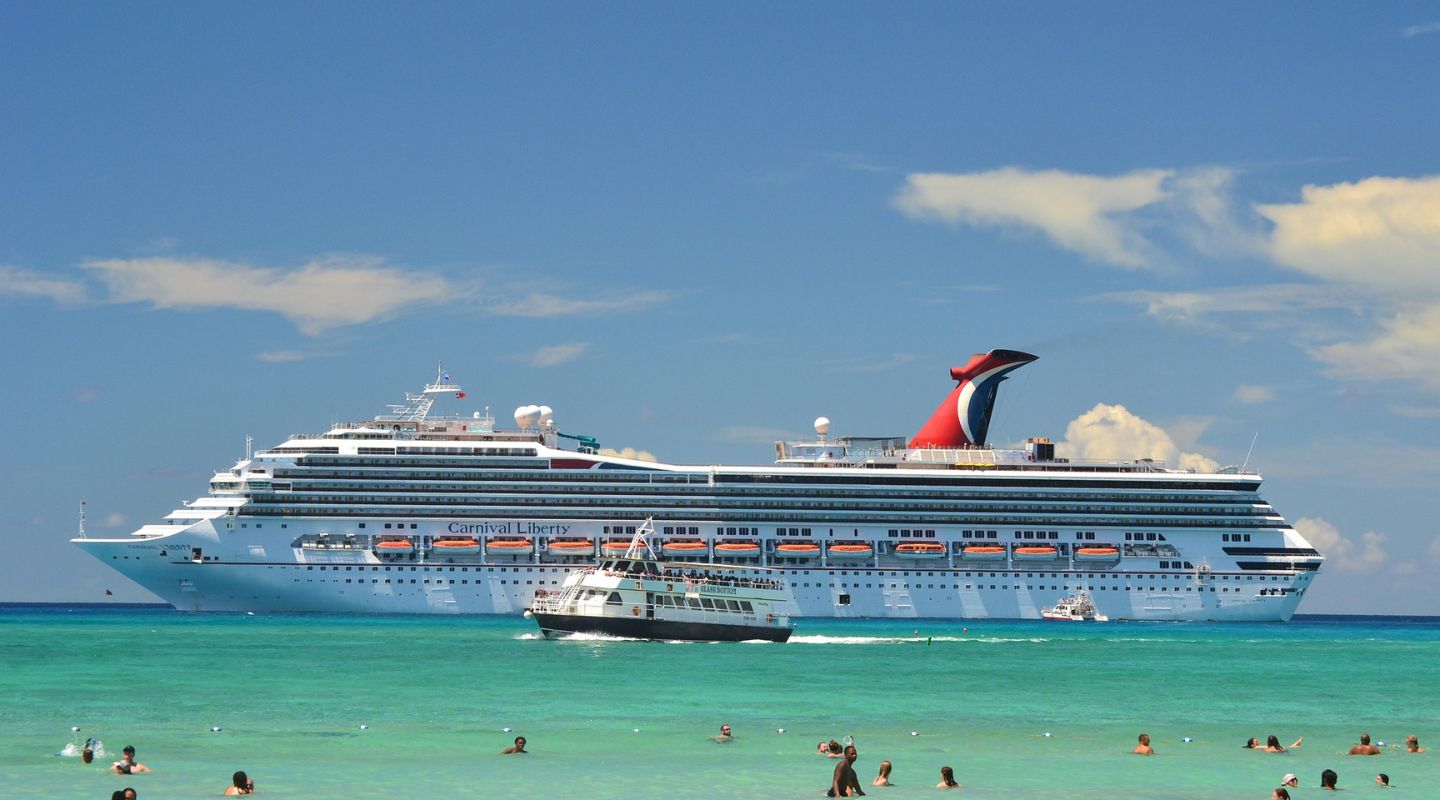 Here are seven tricks to help you score fantastic cruises without paying full price, allowing you to enjoy the best southern, eastern, or western Caribbean cruise routes on the cheap.

There are a number of cruise lines that offer Caribbean cruise routes, including some of the major players on the worldwide cruise scene.

Started in 1968, and with a large 24-ship fleet, Royal Caribbean offers a lot of Caribbean cruises, especially during the winter months. Cruises vary in length from short 2-3 night trips right up to 14 nights and the company runs western, southern, and eastern Caribbean cruise routes. Boats leave from the US ports of Miami, Port Canaveral, Tampa, Port Everglades, Galveston, New Jersey, and Baltimore.

Disney was founded in 1998, so is younger than most cruise lines, and has a smaller fleet of only 5 liners, but it operates multiple southern, western, and eastern Caribbean cruise routes lasting between 4 and 10 days. Liners depart from Fort Lauderdale, Galveston, New Orleans, Miami, Port Canaveral, and San Juan in Puerto Rico.

Celebrity Cruises was founded in 1988 and from its fleet of 16 liners, it operates 4-night Caribbean cruises out of Miami, cruises of 7-8 nights from Fort Lauderdale, and trips of 11 nights from San Juan, Puerto Rico.

European-based MSC Cruises has been in operation since 1989 but is a relatively new face on the Caribbean scene. It operates out of Port Canaveral or Miami and offers 4 to 11-night cruises mainly to Western Caribbean locations such as Mexico and the Bahamas, plus Belize and Honduras.

Do You Need a Passport for a Caribbean Cruise? 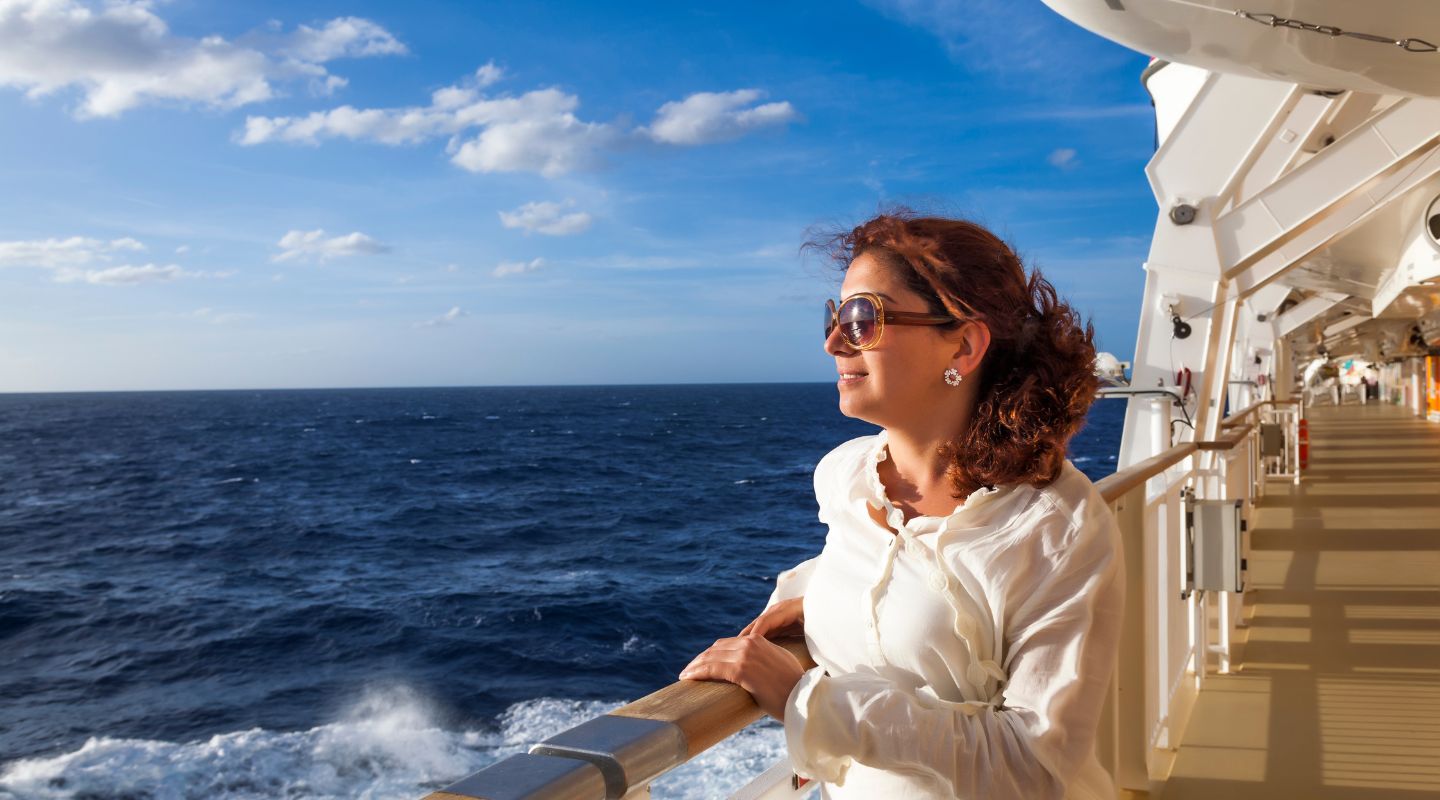 If you’re traveling on a closed-loop cruise route - meaning you will board and depart your cruise in the same US port - you don’t need a passport to travel. However, you would need to present the following documents at the US port:

If you are departing and returning to a different US port, you will need a full passport. Also, be aware that some ports in the Caribbean will not allow cruise passengers to disembark the ship without a full passport. This is the case in:

Should something go wrong that means you can’t return to the US on the cruise ship - for example, a medical emergency - getting home will be much easier if you have a US passport. So it’s worth considering getting a passport before you travel, just for peace of mind.

The Best Times of Year to Cruise the Caribbean

Although we could argue that there’s no bad time of year to cruise the Caribbean, there are some months that are better than others. It depends on what your priority is, so we’ve split down the best times to suit individual circumstances.

I want a balance of good weather and reasonable prices.

I want to cruise when prices are cheapest.

I want to cruise when the weather is best. 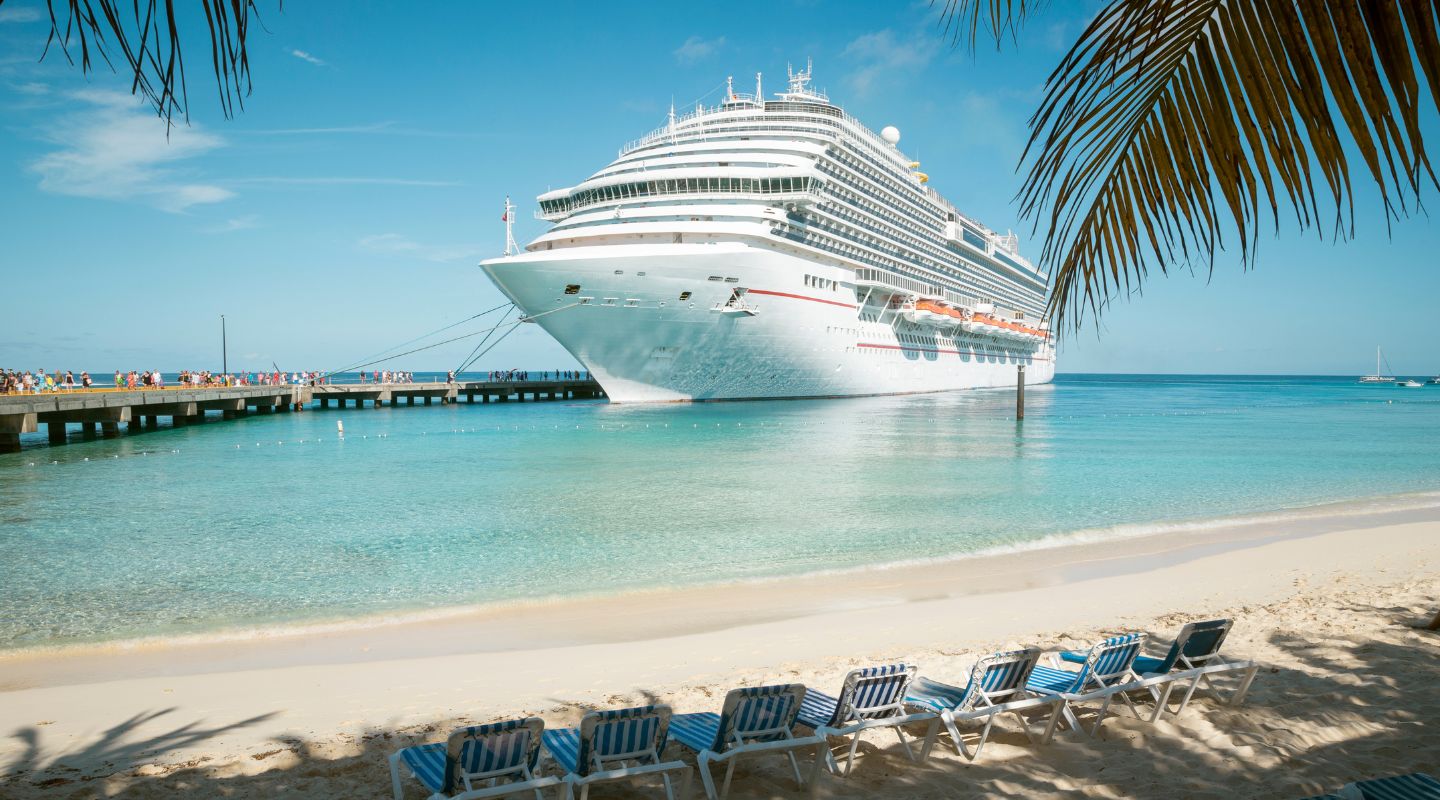 Part of the fun of a cruise is taking part in shore excursions, exploring destinations you’ve only dreamed of before, and trying out new activities.

There are all kinds of tours and excursions to be found in the Caribbean islands, including:

Here are our 3 favorite shore activities and tours for Caribbean cruisers.

If you’re coming to Roatan, you have to meet the super cute native sloths - and you can do just that on this exciting excursion. You’ll be collected from your Roatan cruise port and taken to the island’s monkey and sloth hangout, learning all about these fascinating creatures and even getting to hold one. On this value-for-money excursion, you’ll also visit a rum cake factory, and a chocolate factory, and will spend some time sightseeing on the island.

Cozumel in Mexico is internationally-famous for its diving and snorkeling, as it’s right next to the world’s second-largest barrier reef. If your cruise calls at Cozumel, why not join this snorkel tour, which visits three of the best dive sites on the island? You can expect to see starfish, brightly-colored tropical marine life, stunning coral formations, and maybe even turtles.

On this short-and-sweet White River Valley Tubing Safari excursion, you’ll be collected from the cruise port in Ocho Rios and whisked off to experience the thrills and spills of Jamaica’s famous White River, as you tube past coconut plantations and bamboo groves, taking in the stunning tropical scenery.

Cruising in the Caribbean opens up a whole new world. Sure, you’ll find the paradise beaches of your dreams, but also rainforest and desert landscapes, languages as diverse as Dutch, Haitian Creole, and French, and the most delicious seafood. With so many Caribbean cruise routes and cruise lines to choose from, you’d better get researching - because the islands are waiting for you.

Carly R
Independent traveler and thinker
Carly hails from the UK but jets across the Atlantic at any opportunity to spend time in Mexico. Architecture, street art, food experiences, and sunsets float her boat, as well as discovering off-the-beaten-path destinations.

The best things to do in the Caribbean

Information on the best excursions and tours in the Caribbean

Best tours in the Caribbean 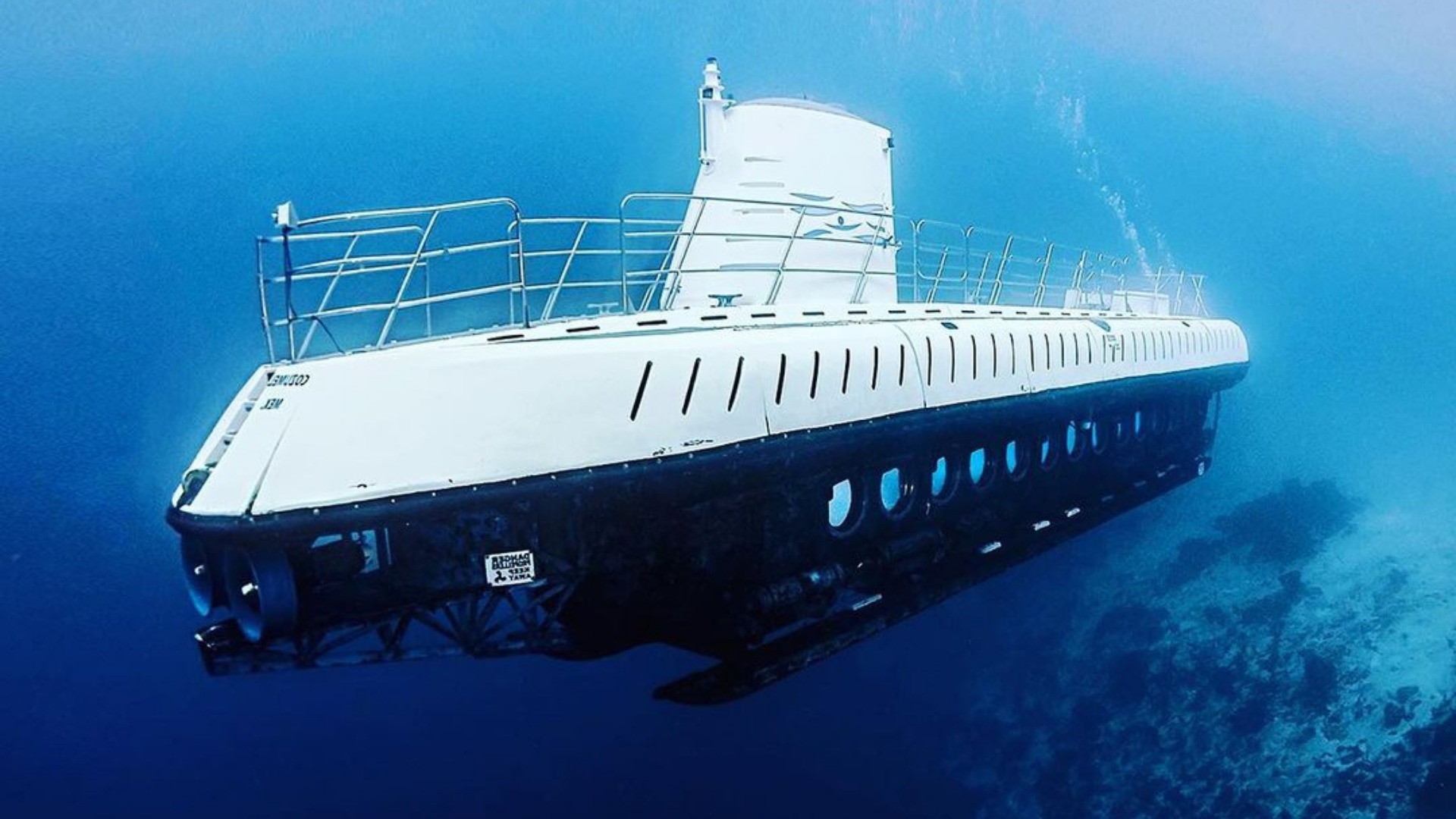 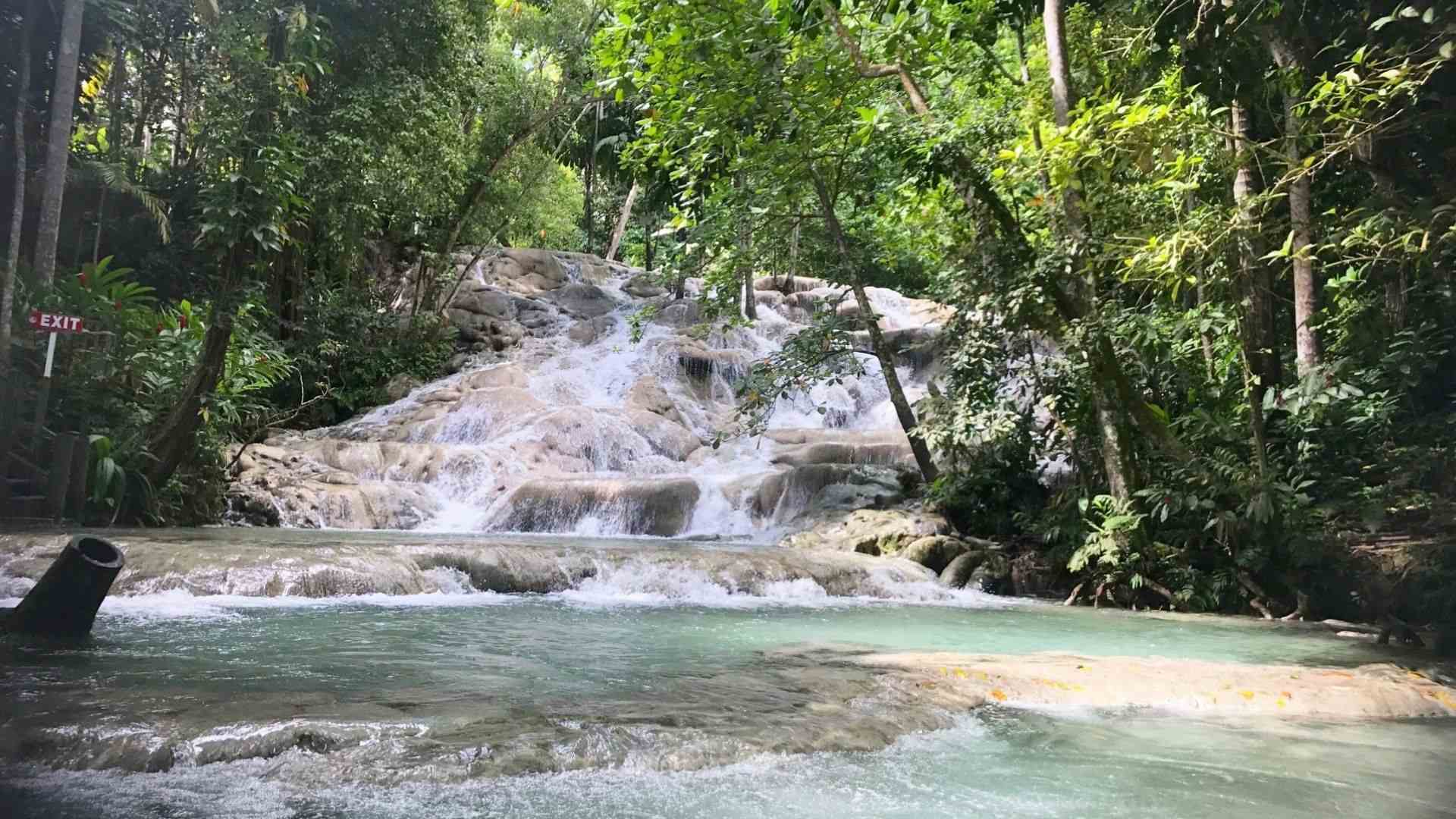 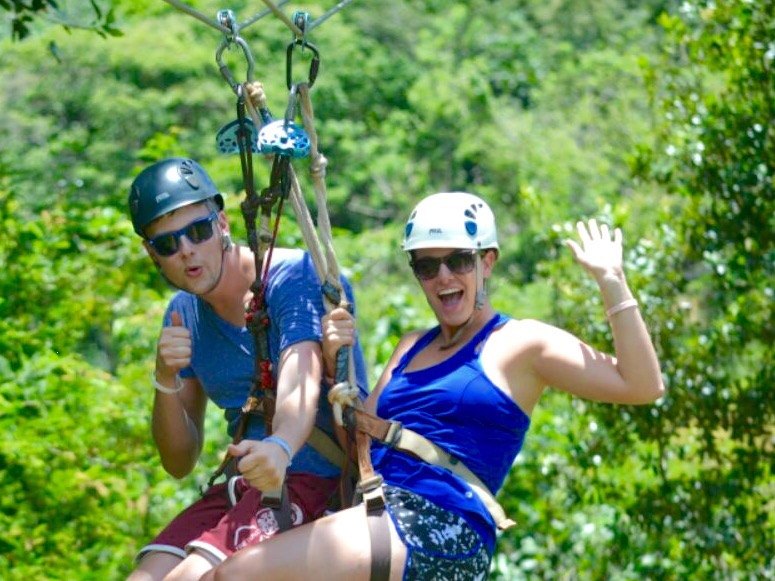 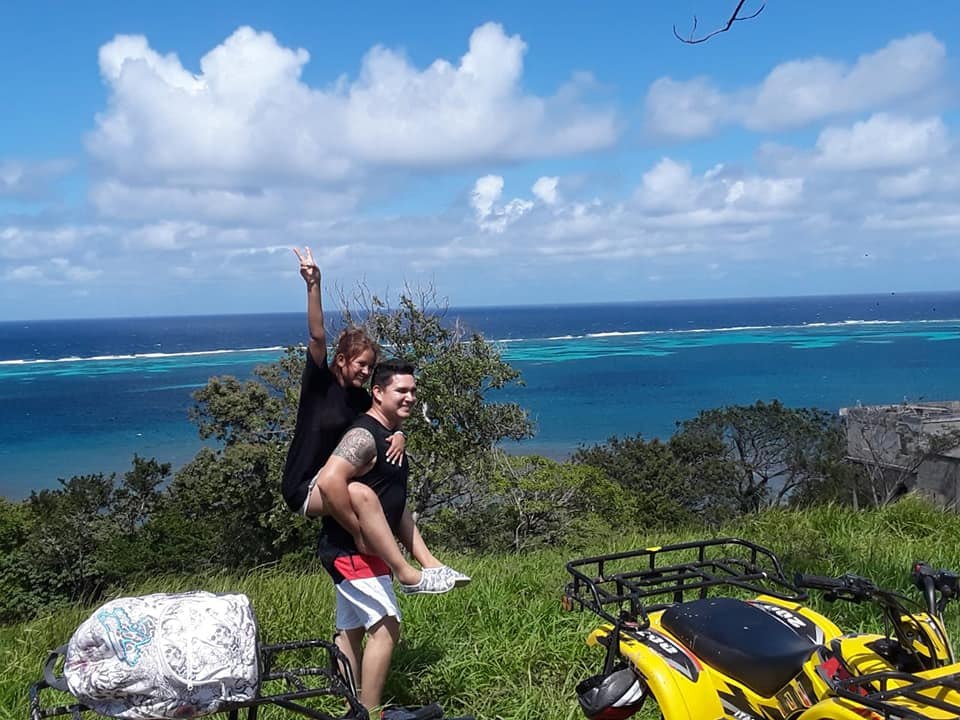